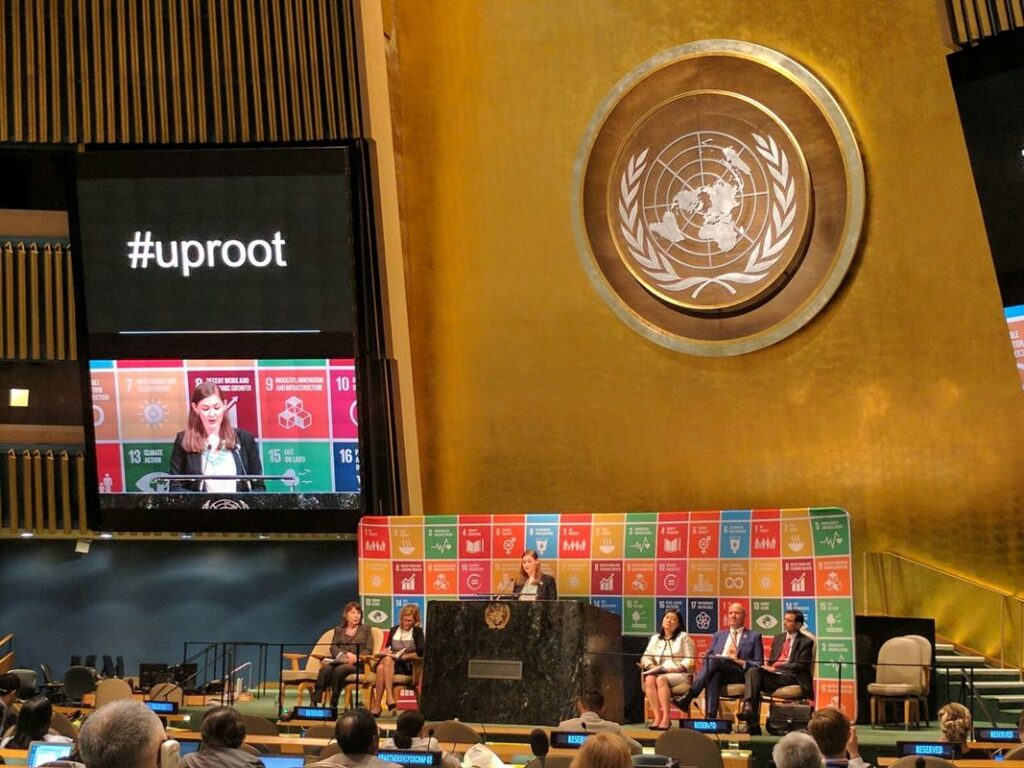 The High Level Political Forum is the UN’s central platform for the follow-up and review of the Sustainable Development Goals. At its most recent meeting in July 2017, UN-DESA hosted a Partnership Exchange – a special event with a focus on multisectoral partnerships supporting the realisation of the SDGs.

The PACT was very honoured to be selected as one of only six partnerships featured in the session on Goal 3 (health and wellbeing) and 5 (gender equality), and the only youth-led partnership on the panel. Hayley Gleeson, The PACT’s lead on comprehensive sexuality education (CSE) and integrated HIV and SRHR services spoke on the panel, which was held in the UN General Assembly Hall, all about The PACT and our achievements. Her full speech is below.

“Thank you Chair. And thanks so much to all of you for coming to this event and thanks to my fellow panelists for sharing their partnerships. My name is Hayley Gleeson, I am 26, and I work with the International Planned Parenthood Federation. I am here today to share some experiences of The PACT – a partnership of youth-led and youth-serving organisations working on HIV and sexual and reproductive health and rights all over the world.
We are around 80 organisations, big and small, united in our frustration that young people are still left behind in the HIV response, and standing up for our right to have a say in decisions that affect us. We are proudly youth-led, and our governance is all under the age of 30. We take diversity and representation very seriously, and prioritise the engagement of key populations including young people living with HIV, young lesbian, gay, and bisexual people, trans and non-binary people, young people with disabilities, and young people out of schools, among others. We are also very fortunate to benefit from technical support and guidance from the UNAIDS youth programme.
Our biggest project is ACT!2030 – a youth led initiative implemented by IPPF, UNAIDS and several PACT member organisations with financial support from the Swiss Agency for Development and Cooperation. In 2013 we came together to advocate for HIV and SRHR to be included in the post-2015 development agenda. Four years later we work in 12 countries, through alliances of grassroots youth organisations working in partnership with UN agencies, governments, academia and other stakeholders to establish youth-led data driven accountability around HIV and SRHR and to advocate for meaningful youth engagement in decision making around health and wellbeing.
Comprehensive Sexuality Education is a key priority area for The PACT. Last year to further our efforts to promote CSE, we partnered with UNESCO to support youth-led advocacy around CSE and to produce advocacy resources written by young people. The PACT also serves on the advisory board for the review and update of the United Nations International Technical Guidance on Sexuality Education, making sure that youth voices are being included.
To further promote our collective efforts we recently launched #uproot – a youth led political agenda to tackle the systemic and structural barriers that keep young people at risk of HIV and poor sexual and reproductive health – including stigma, discrimination, and exclusion. Partnerships are key – both strengthening partnerships within the sector, such as cross-regional linkages of networks of young people living with HIV to promote knowledge exchange – and outside the sector, working with medical students, parliamentarians, UN agencies and others to stress how HIV and sexual and reproductive health really underpins so many other parts of the 2030 Agenda.
The PACT works because we remain youth-led, community focused, and collaborative. PACT members benefit from technical support, capacity building on advocacy, data collection, fundraising and grant management, as well as knowledge exchange and opportunities for partnership. But most of all, The PACT works because we are all driven by our goal to ensure meaningful youth engagement in the HIV response. And we will not stop until all young people can freely enjoy their sexual and reproductive rights, without fear and without discrimination. Thank you.”