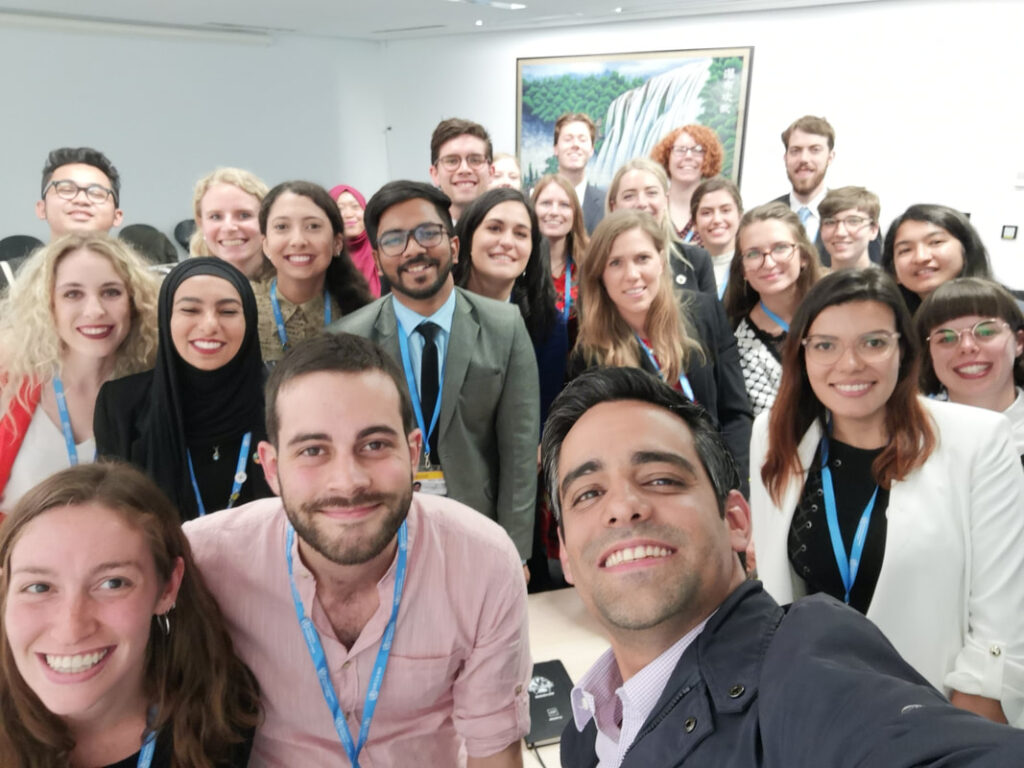 While the principle above is something that decision makers seem to be more aware of than a couple of decades ago, there is still a long way to go until young people in all their diversity are taken into account when shaping public policies and programmes. Global decision-making spaces seem to be packed with tokenistic practices that far from promoting meaningful youth participation, turn young people into checkboxes.

Moreover, whenever there is an opportunity in place, young people still have to fight structural barriers that unfortunately perpetuate oppression on the basis of gender, place of birth, ethnicity, skin color and many other traits that shape individual and collective identities. All these limitations are also replicated at a national and local level, where most of the time youth still struggle to contribute to the political agenda and only those pertaining to more privileged groups get access to relevant spaces.

During this year�s World Health Assembly in Geneva, the Youth Coalition for Sexual and Reproductive Rights organised for the first time a side event that addressed these barriers and put at the centre of the discussion the need to challenge privilege and hierarchy in global processes, particularly when it comes to Sexual and Reproductive Health and Rights (SRHR). Plenty of youth-led organisations are at the forefront of the SRHR movement, yet we still struggle to get a seat at the table and be considered essential stakeholders. When Sexual and Reproductive Health and Rights are not upheld and respected, young people tend to suffer a big portion of the consequences (in particular those who are placed in situations of vulnerability).

To contribute to the discussion, we counted with the participation of three panelists: Bruna Martinez (Amsterdam Youth Force), Mireia Amat (Associaci� de Drets Sexuals i Reproductius) and Ruben Pages (UNAIDS) who, through their contributions, uprooted the main causes of inequality and provided tips and suggestions on how we can direct our efforts while keeping a holistic and intersectional approach.   Charlotte O�Leary, IFMSA�s Liaison Officer to the World Health Organization was in charge of the moderation, adding valuable points to the discussion as well, while efficiently summarising the main ideas throughout the whole event.

During her interventions, Mireia highlighted their star project �Pren-los� (�Use them� in English), a Catalonia-based mentorship programme with the aim of creating meaningful youth engagement in advocacy for sexual and reproductive rights, starred of course by young people as the essential stakeholders of their own rights. Through the promotion of individual and collective agency, the final purpose of the mentorship is to contribute to the creation of a strategic youth space of political advocacy in Human Rights, specifically Sexual and Reproductive Rights both nationally and internationally.

<< Pren-los will hopefully succeed at transforming radically local and national institutions in Catalonia, taking, from that collective first person experience and knowledge, a starring role in the design of feminist public policies regarding Sexual and Reproductive Rights.>>

Mireia finished with a quote by Salvador Allende: �Being young and not being revolutionary is almost a biological contradiction�. With that, she reinforced the role that grassroots self-organized youth movements have starred in the advancement of youth in socials rights as well as the commitment of young people to advance a feminist transformation and to promote direct and participative democracy.

Ruben contributed to the discussion by pointing out that all challenges that young people face to access HIV and SRH services have a common meeting place, independent of who they are or where they live. That meeting place is where inequalities, exclusion, violence and discrimination sustain the status quo, which prompts us to tackle the root causes that put people at risk.

<<Data is key. UNAIDS has revised its indicators to reflect a more comprehensive view of the barriers faced by young people, including in the context of spousal and age of consent to services, comprehensive sexuality education and youth participation in the HIV response>>  – Ruben Pages, UNAIDS.

As part of his interventions, Ruben also mentioned that supporting meaningful youth participation does not only mean inviting young people to meetings. It also means providing political, technical and financial support to young people, their organizations and networks to advocate, hold stakeholders accountable and inform meaningful policy-decision spaces at every level. Finally, he also gave some insight on the current internal efforts UNAIDS is taking to amplify youth voices and advocate for meaningful youth participation within the organisation.

Our third speaker, Bruna, briefly explained the purpose of the Amsterdam Youth Force, which amplified youth voices during the AIDS conference. Considering the many practical obstacles youth face when it comes to organizing at events like this, through the International Youth Force they decided to carry on their mission to meaningfully involve and support young people�s interests around the AIDS conference.. She started by emphasising the need to search for sustainable partnerships, which at the end of the day helped her organisation thrive and play a meaningful role during AIDS 2018.  She followed her first intervention with important remarks on the need to apply transversally an intersectional lens and pointed out how within youth, people attending spaces like the World Health Assembly are still generally part of privileged groups. Bruna finalised by saying how essential it is that we work harder on ensuring young people are actually represented in all their diversity. Being autocritical and transforming our own organisations from within is definitely an important pillar to do so.

<< I don�t only use the term SRHR but I also focus on reproductive justice, as it addresses the structural inequalities that affect women�s reproductive health and choices and that are born from the hegemonic economic system>> – Bruna Martinez, Amsterdam Youth Force.

Overall, the side event was successful at creating a sharing space where people felt comfortable providing tips, first-hand experiences and perceptions on how privilege and hierarchy could be fought, especially in global decision-making spaces.  However, much remains to be done, we need to stop preaching to the converted and as difficult as it might be, take our presence to other spaces. The conversations that arose helped shape a narrative around intersectionality, feminism and social and reproductive justice. As young people, we need to build our actions around this discourse and make sure we transform decision-making spaces from within, not only during staple events such as WHA, but every single day.