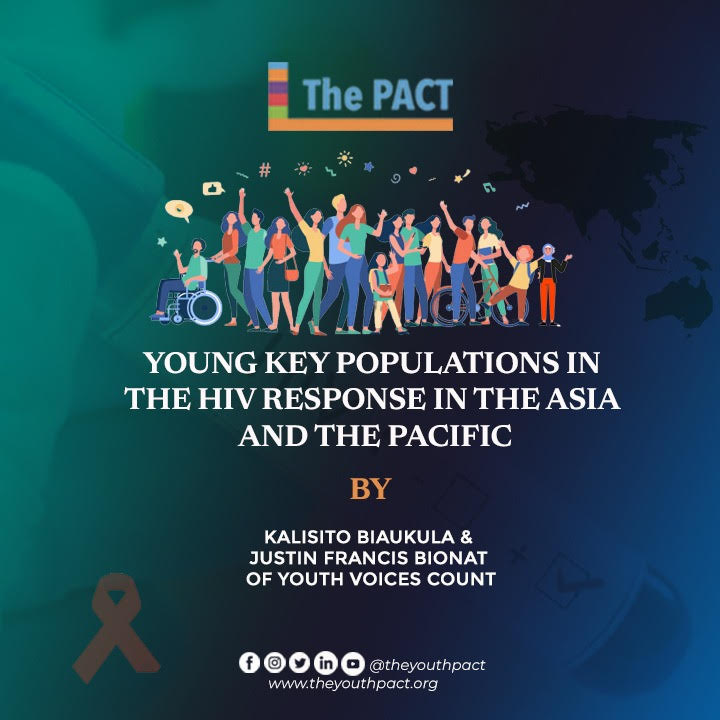 As the World Health Organization (WHO) declares the outbreak of novel coronavirus (COVID19) as a� global pandemic, while COVID19 vaccination continues to spread around the world, the young key population must continue to take action on eliminating inequalities in AIDS. As governments, civil society organizations and activists convene virtually high-level Meetings on AIDS this week

�Today marks 40 years since the first case of AIDS was reported. We stand in solidarity with all people living with or affected by HIV and we remember our family, friends who have died from aids-related illness� tweeted Winnie Byanyima � UNAIDS Executive Director.

The role of young people playing a leading role in decisions that affect their bodies and life is vital in the HIV response in Asia and the Pacific. This region of the world that still hold the most number of punitive laws such as criminalizing same-sex relations, use of drugs and any forms of sex work and travel restrictions for young key population, this fuels stigma and discrimination and creates barrier for many key populations in accessing education, employment and Sexual Reproductive Health Rights services.

The global pandemic has led many governments downsize in support of HIV programs among young people and lack of funding opportunities for many youth-led and community-led organizations in Asia and the Pacific. This poses a huge disadvantage for the young key population who are living with or affected by HIV as we navigate the services and the system that further exclude marginalized communities.

�As young people, we demand partnerships with governments across Asia and the pacific, development partners, donors and all young people, including providing equitable access to the full range of� self and community care, public health, access to justice amongst others and secondly, to engage young marginalized key population in meaningful participation on policies and programs.

As it looks, youth-led organization accessing� large donor remains a challenge for smaller organizations to compete for funding and the continuous shrinking of civil society spaces has become a barrier to security and sustainability especially for youth-led organizations who most likely miss out on numerous funding opportunities. Due to lack of experience, external support from civil society, governments and key stakeholders in most countries, domestic funding does not exist for the young key population.

�We young people, we know the market because we are the market. Sustainable funding for the young key population initiative, YKP� Service delivery and advocacy with restrictive funding application and reporting processes can be a game-changer,� said Fletcher Chiu, a� youth leader from Taiwan.

ENSURING EQUALITY IN THE MOVEMENT

In the process of reviewing the progress made in reducing the impact of HIV since the last high-level meeting on HIV and AIDS in 2016, let us ensure that all populations are included. This means including populations who are men who have sex with men (MSM), transgender and other sexual and gender minorities like Lesbian, Gay, Bisexual, Transgender, Intersex and Queer (LGBTIQ).

There are various ways to gauge meaningful engagement, inclusion and equality. Between 2019 and 2020, Youth Voices Count and the PACT implemented the #Uproot Report Cards in Asia and the Pacific. The implementation brought together young people from different key population groups, including young LGBTIQ and young PLHIV, to discuss the state of sexual and reproductive health and rights (SRHR) in their countries. Over the period, the #Uproot Report Cards has visited Myanmar, Cambodia, Laos, India,� Sri Lanka, Papua New Guinea, and Indonesia.

This process allowed us to understand the status of the countries in fulfilling the SRHR of young key populations. This provides us with a contextual backdrop of the meaningful engagement required to ensure that these populations are not left behind. In moving forward, the advocacy and the commitments of the state have to ensure that all populations are included.

There is a movement to ensure the inclusion of persons of diverse SOGIESC in the discussions surrounding the HLM. The LGBTI UN Core Group during the HLM delivered a powerful message reminding us that: �The structural barriers that prevent LGBTI persons from their full and equal enjoyment of their human rights, including their right to the highest attainable standard of physical and mental health, prevents them from enjoying similar health outcomes as the rest of the population.�

We believe this is a reminder that our work should recognize these nuances and understand that the fulfillment of health human rights is hinged on ensuring that all populations are included. LGBTIQ individuals are part of marginalized communities that access sexual and reproductive health services, including HIV/AIDS testing, treatment and support.

Civil society will play a crucial role in the next years to come to ensure that their constituencies that are part of young key population groups, like LGBTIQ communities, are given the platform to meaningfully engage and participate and that their human rights are heard and considered.