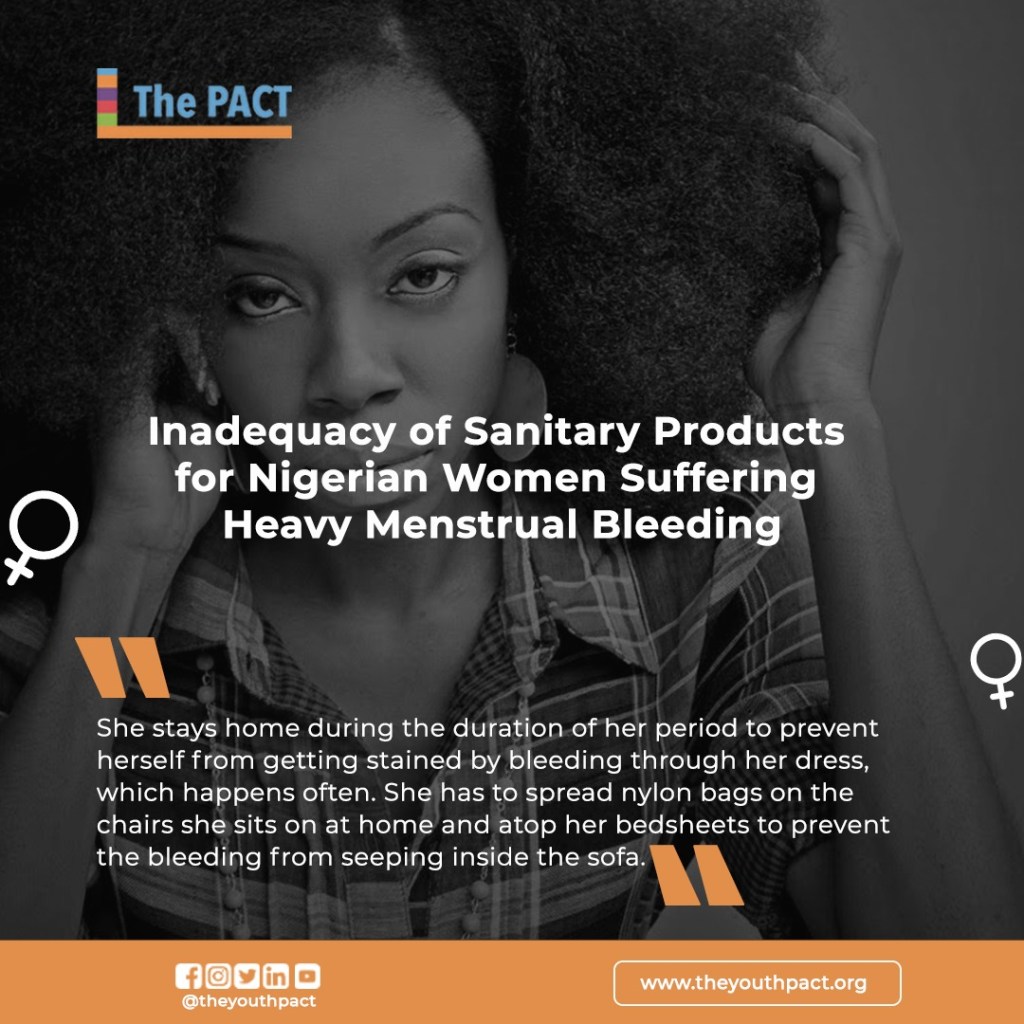 The first time Talatuwa* became fully aware of how unusual and alarming her menstrual periods are, she was sitting on the toilet seat in her self-contained apartment in Kaduna, Northwestern Nigeria, where she was pursuing a degree at the Ahmadu Bello University.

Her roommate at the time had called out her name and reminded her that she had been in the toilet for up to an hour.

“She was like, you have been in that toilet for over an hour.  Is something wrong?”

Talatuwa was neither constipated nor having any other kind of difficulty. She was sitting there because she was on her period and had been bleeding heavily. She had gotten tired of having to change pads almost hourly. And so she had, out of frustration, decided to just sit on the toilet seat and bleed freely, to avoid the fatigue of having to change or wash so frequently. Still, she did not realise she had been there for up to an hour. And so when her attention was drawn to the fact, it hit her that that was not normal at all. She recalls that she was a first-year student at the time.

When she first started menstruating at 14, she was distressed by how heavily she was bleeding, particularly by the fact that menstrual pads were never enough to help her through it. They did not work for her the way that she saw them work for her friends and other women around her. Still, it took two years and the toilet incident for her to come to the full realisation that something was not right. After several conversations with women on the subject matter, she was able to weigh her experience with those of the vast majority of women she knew. This made her conclude that while it did not necessarily signal a health complication, it was definitely not normal.

Years later, she eventually had to go to the hospital to get it checked. She finally had confirmation that it was not due to some kind of ‘womanly failure’ on her part. The next pathway was then to find a suitable sanitary product that could cater to her condition.

This has been impossible.

Not an isolated case

Ada* has a similar experience. When she first started menstruating, she was convinced that something was wrong. She was also certain that she had been wearing the pad the wrong way.

Then, when she got to the university and made friends with more women, she started to have conversations about the condition with them. She was lucky enough to find a few women who shared her experience. The knowledge that she was not alone alleviated the burden for her a little.

“I asked them: ‘Do you notice blood clots, too?’ And they were like, ‘Yes na, big lumps, too.’ So that’s when I realised that that was my lot.”

She also started to have more in-depth conversations about it with women who were going through the same thing. Finally, she met someone who taught her to cope by wearing multiple pads at the same time.

“It helped me a lot, but it still was not enough,” she says.

She has had to make lifestyle adjustments to help with the condition. For example, she stays home during the duration of her period to prevent herself from getting stained by bleeding through her dress, which happens often. She has to spread nylon bags on the chairs she sits on at home and atop her bedsheets to prevent the bleeding from seeping inside the sofa.

She also chooses the colour of the clothing she wears more carefully; she wears dark colours.

“When I am on my period, I’m always washing bedsheets because I’m always getting it stained. I also don’t go out, I limit the way I socialize. I also wear dark colours; I go for dark blue, wine red, navy blue, black trousers. If I must wear normal blue, then I must wear a jacket over it. It’s really an uncomfortable time for me. I was complaining about it just yesterday to my sister.”

Asked if she had ever thought of going to the hospital, she disclosed that she did not even know before now that the condition was referred to as menorrhagia. This is the same for many women due to the lack of awareness.

It can also be attributed to the fact that women are often conditioned to see suffering and painful situations as normal.

While Talatuwa says after years of believing her periods to be normal and seeing her inability to cope as an indictment of her weakness as a woman, she eventually went to the hospital to have it checked, Ada says it never occurred to her to do so.

“There was actually nothing stopping me from going to the hospital to have it checked,” she says. “But I think because it happens to me every time, I believed that perhaps that’s just my own lot in life. That perhaps the way that other women suffer cramps, my own cross was to deal with heavy bleeding and blood clots.”

Recognised through abnormally heavy menstrual bleeding, menorrhagia may be as a result of underlying health issues, such as hormonal imbalance, side effects from certain medications, or the use of intrauterine contraceptive devices. However, it is oftentimes not tied to any illness or disease.

Ada explains that while she has never gone to the hospital to have the heavy bleeding checked, she has once been diagnosed with hormonal imbalance after she experienced an irregular menstrual cycle. This may be the link to her own heavy menstrual bleeding.

The condition, despite being widespread, has little awareness and research done on it, especially with focus on Nigerian women and perhaps in Africa. In the United States where there is still scarce material on the subject, it is estimated to affect over 10 million American women each year.

For many women who suffer heavy menstrual bleeding in Nigeria, the biggest challenge remains access to adequate sanitary products that they can use. They go through many uncomfortable life changes, such as missing work, skipping classes, missing social gatherings, having to use rags or double pads that may then cause them infections, having to wear darker colours, and spreading nylon bags on a surface before sitting on it. But these can be eliminated or, at least, mitigated through the availability of adequate sanitary products.

However, the menace of period poverty and of unsafe sanitary products in Africa, particularly Kenya, South Africa, and Nigeria, have not been properly addressed yet. In 2020, Kenyan women took to Twitter to share their unpleasant experience with using the Always sanitary pad, using the hashtag #MyAlwaysExperience. Their complaints ranged from irritation, painful rashes, severe burning sensation, and even unpleasant odour. There are allegations that substandard pads are shipped to African countries instead of being disposed of.

In an article that explored the problem, Ciku Kimeria wrote, “For decades, a section of women in Kenya using Always had assumed that the issue was their own period, their own flow, their bodies—everything, but the pads that they were using.”

“I feel mildly annoyed that I am not able to get that pad in Nigeria, that I have to wait for whenever my sister visits and brings it. It’s so annoying because whenever she brings it, I still have to find a way to manage it. What I do is that when I have to go to church or attend a similarly important gathering, I wear that particular pad, because I am safe with it and can sit in a cab in it without feeling uncomfortable.”

On days when she can afford to stay home, she settles for the use of the usual pads that are readily accessible even though they do not meet her needs.

“When I am in this house, I buy the ones that are out there. And it means that I have to get up every now and again to check myself and to change, and to check the nylon bag I am sitting on … all those annoying things. I do not understand why we do not have this type of pad in Nigeria. It does not make sense to me, because I know I am not the only one who has this type of period. There are other girls. So I just feel like it’s something we should have.”