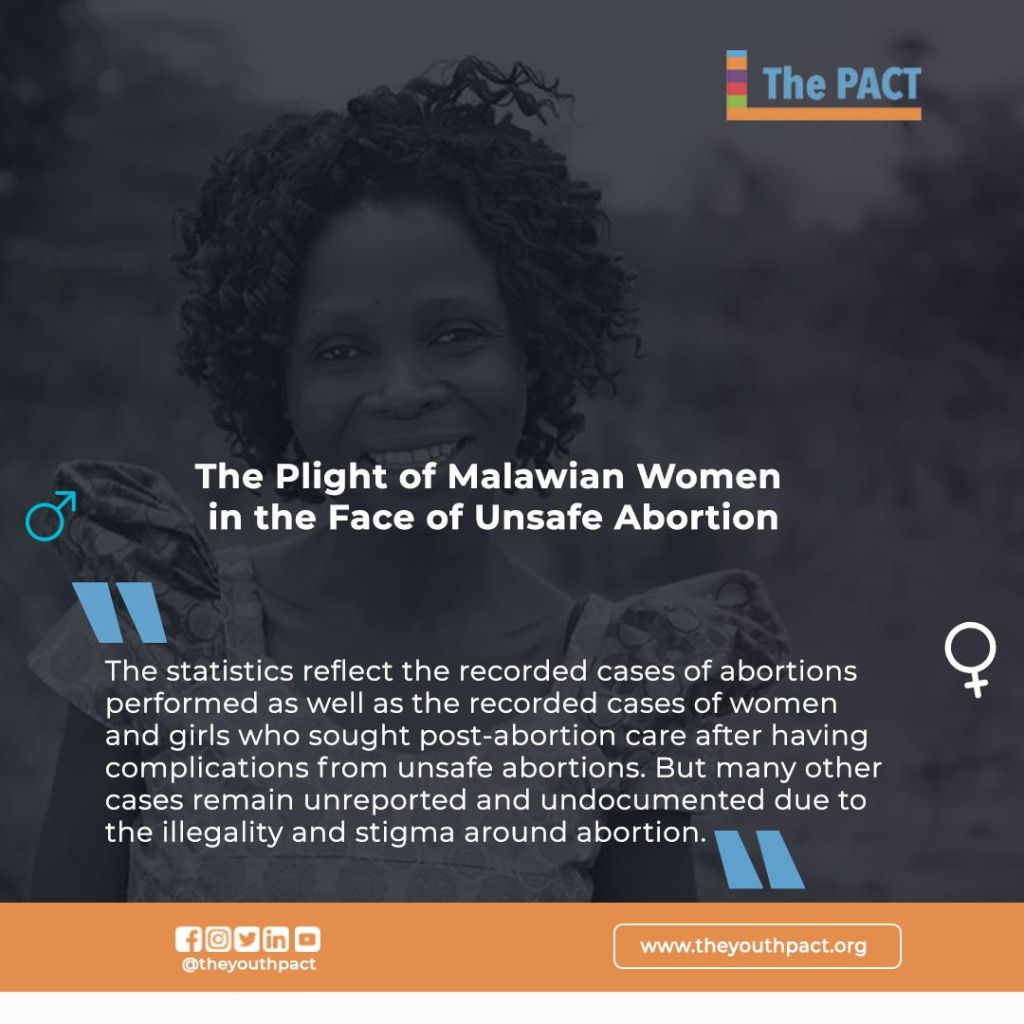 Cecilia (not real name) was raped by her brother’s friend. The incident was so traumatising all she wanted to do was forget. So, she did not file a complaint with the police. She also avoided the hospital. Instead, she ran to her best friend for comfort and advice. But she could not simply move on with her life, not after discovering a few weeks later that she had conceived.

“My world stopped,” she remembers. “I took three tests, not believing the positive result each time.”

She could not confide in her parents, who would likely scold and disown her. So, she asked the doctor if she could terminate the pregnancy. No, came the reply. Abortions were prohibited under Malawian law. Her best friend and sister recommended paying for a safe, confidential abortion process by a doctor, but the fee was near twice her salary.

“My best friend gave me the second option, saying she had heard of another young woman who had visited a traditional healer who was based in the sketchy side of town who gave her some medication to terminate and it worked. She only knew that it worked and never knew of any negative side effects, and so while I felt this option was neither safe nor sane for me, I thought that was the best option for me because I was desperate and running out of time. We went together, and the healer gave me the drink to take once I got home. He never asked how far my pregnancy was, or how I became pregnant, he seemed more interested in having me pay and leave.”

She felt excruciating pain after gulping down the solution and started to bleed. Then, her sister took her to the nearest hospital for post-abortion care. She spent three days on admission.

Cecilia is only one of many young women in Malawi with such an experience. The Guttmacher Institute estimates that 141,000 abortions occurred in Malawi annually by the end of 2015 alone. According to the same research study, a majority of the recorded abortions were performed under clandestine and unsafe conditions and often resulted in complications, including ruptured wombs, severe bleeding, and death. This placed unsafe abortions as one of the leading causes of maternal deaths in the country.

While there are many studies on the magnitude of unsafe abortions in Malawi, that have largely focused on barriers to accessing modern contraception, child marriage, and poverty as key factors for unplanned pregnancies, the contribution of sexual violence is rarely highlighted.

Sexual violence leads to unintended pregnancies through the likelihood that perpetrators do not use condoms. Also, victims of sexual violence rarely come forward to report the violence, let alone report pregnancies as a result of the violence, and instead opt for solutions beyond the safety and legality of safe abortions by qualified medical practitioners.

Unintended pregnancies, especially among adolescent girls and young women, remain a concerning health and social problem in sub-Saharan Africa and worldwide. Between 2010 and 2014, approximately 44.5 per cent of all pregnancies and 23 per cent of births were unintended across the globe.

In Malawi, more than half of all pregnancies have induced abortions each year, almost all of which are acquired through unsafe methods.

Africa accounts for approximately 15 per cent of all abortions globally, but records as high as 65 per cent of abortion-related deaths. Many of these deaths occur in countries that maintain restrictive abortion laws such as Malawi.

It was because of these devastating statistics that the Termination of Pregnancy (TOP) Bill was presented as a potential solution.

Malawi maintains the provisions of the Penal Code, which state that abortion is only legal to save a woman’s life. Obtaining an abortion for any other reason is punishable by seven to 14 years in prison.

Despite ratification of multiple human rights conventions and treaties including the Maputo Protocol that provides for the enhancement of women’s bodily autonomy through improving access to modern methods of family planning including safe abortion, the penal code provisions, first enacted as far back as 1861, are still enforced.

In light of the severe complications and high death rates occasioned by the current legal framework, the Termination of Pregnancy Bill was drafted to legalise three other instances in which safe abortions may be performed.

Without eliminating the existing law, the bill proposes that safe abortions be performed under the following grounds: To save a woman’s life; to preserve the mental and physical health of the woman; in the case of severe foetal malformation; and if the pregnancy is as result of rape or defilement, in which case the victim may choose to terminate it.

Since the introduction of the bill, there has been a debate in the country on its necessity. Advocacy campaigns have faced massive opposition, particularly from the religious bodies in Malawi. But while many oppose its passage, many women and girls continue to face complications from unsafe abortions.

There are many who oppose the TOP Bill on the basis of morals, claiming that it goes against the Malawian moral fabric. But where then is the morality in failing to put an end to sexual violence and then refusing to recognise the trauma and need for mental health support for such trauma, and then proceeding to deny the victim the right to choose for herself what to do with her body by forcing her to carry a pregnancy she does not want.

It is high time the Malawian Government and society re-examined the cultures we guard so closely and accept how they are negatively affecting women and girls, beginning with the perpetual denial of women’s bodily autonomy.

Cecilia describes the few weeks after she left the hospital as some of the darkest that she has experienced. She lost her job because she was absent for a long time, started detaching herself from friends and family, and would often cry herself to sleep.

“While my best friend and sister tried to comfort me, I felt helpless. I had no regrets about terminating the pregnancy, I felt angry instead because there was so much that could have been done to help me,” she says.