Access to Menstrual Products is a Human Right. Period. 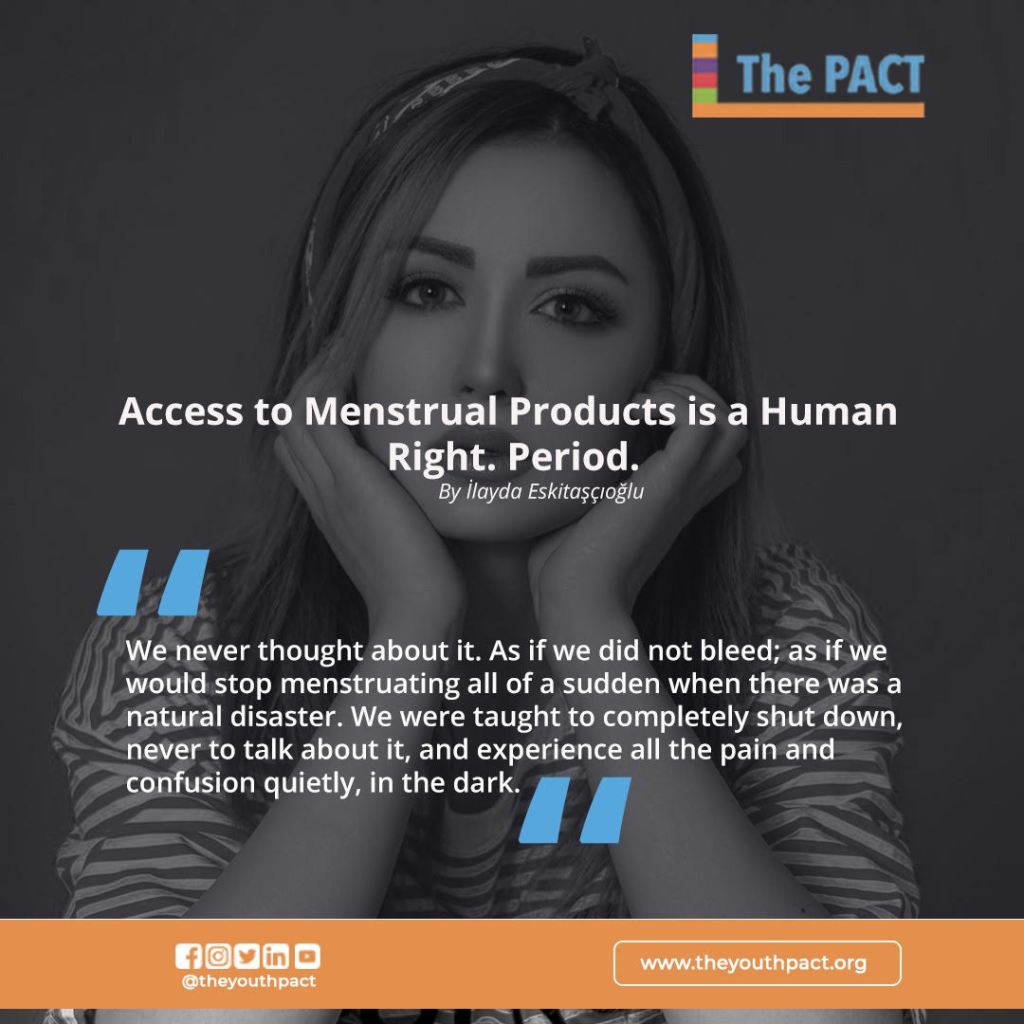 I was 18 years old when the Van earthquake happened. Its magnitude was 7.2, with waves of aftershocks. More than 600 people lost their lives. Thousands of others sustained injuries and became homeless. Van is a beautiful province in Eastern Turkey. It is our hometown and an amazing community, where people obsess over tea and children enjoy climbing apricot trees. Once we recovered from the initial shock of the earthquake, my family immediately started to prepare aid boxes to be sent to the disaster zone. Even though my matriarchal family consists mostly of strong women, none of us thought of putting sanitary pads or tampons into those boxes.

How odd, I would later realise. We never talked about it, even though we were a crowded group of women of all ages. We never thought about it. As if we did not bleed; as if we would stop menstruating all of a sudden when there was a natural disaster. We were taught to completely shut down, never to talk about it, and experience all the pain and confusion quietly, in the dark. How incredibly odd. Once we realised that we forgot the essential products, we immediately sent some more packages, but the way we were thinking stuck in a corner of my mind.

A couple of years later, I came across a tweet. The Turkish Language Institute had updated its dictionary and added a new definition to the word “kirli” (kear-lee), which means “dirty, impure” in Turkish. The added definition was “a woman who’s menstruating”. Think how a small child reading that definition would feel about their bodies and the biological experiences that await them. That is when I had my eureka moment and decided to do something. I started to relentlessly research menstruation.

I founded ‘We Need to Talk’ back in 2016. We are an NGO based in Turkey and we are fighting against period poverty and stigma in the Middle East. We are especially trying to reach out to three vulnerable target groups: seasonal agricultural workers, the Syrian refugee community, and children who are going to school in remote rural areas. We organise field projects, inform menstruators about puberty and menstruation along with volunteer doctors, hold Q&A sessions, and, most importantly, we create safe spaces where we can talk honestly and openly about menstruation.

That is where our name comes from. It sounds like the first sentence of an awkward break-up talk. But this is exactly what we want. We want to talk about things no one wants to talk about. Talking is the first step towards destroying stigma. And we believe this applies to many other topics related to sexual and reproductive health and rights, as confirmed by our fellow SRHR activist-friends.

Apart from encouraging menstruators to talk, we also provide menstrual products that can last for a harvest season or an educational semester to the vulnerable communities we work with. We are doing our best to promote sustainable menstrual products such as reusable sanitary pads or menstrual cups and we raise awareness and advocate for just taxation of menstrual products worldwide.

Period poverty, in other words, the lack of access to menstrual products, is a complicated problem that has many different dimensions. Lack of access to clean water, lack of a clean, safe toilet or not being able to access valid, clear information about menstruation are only some aspects of this problem.

One of the biggest reasons for period poverty is the unjust taxation of these products. For example, in Turkey, menstrual products are heavily taxed with an 18 per cent VAT, which is the highest tax rate the government can take from any purchased product. Menstrual products have been seen as luxurious goods, rather than basic needs that are absolutely necessary for our health. Taking a quick look into our parliaments and decision-making mechanisms with the over-representation of non-menstruating, older, privileged men can explain this bizarre situation. Thankfully, with the support and ownership of feminist organisations around the world, governments have started to abolish or decrease the tampon tax, with Kenya initiating the global movement in 2004, followed by Canada, Malaysia, India, Colombia South Africa, Australia, and later on, some EU member states and US states.

The removal of the tax on menstrual products is definitely a step in the right direction to reduce the costs. There are other policies that Scotland and New Zealand have initiated, such as providing menstrual products for free in public spaces, especially in public schools. We are hoping to make this good practice a reality for many young menstruators around the world, and, most importantly, we are pushing for comprehensive, evidence-based, and age-appropriate sexuality education within national education curricula, focusing on menstruation. Away from the typical training in which boys are sent away and girls are asked to stay in class, we demand comprehensive and inclusive training for everyone, menstruating or not. Laws and policies need to change for the better without a doubt, but to change mindsets, we have a lot of work to do.

It is important not to lose sight of what we want to achieve as sexual and reproductive health and rights activists. First and foremost, period poverty, just like any other SRHR issue, should not be seen as a charity cause, but from the lens of human rights. We need to seek sustainable solutions with a rights-based approach. No matter what we work on — access to abortion, HIV, or period poverty — intersectionality must be at the core of our collective efforts. Intersectionality is not only about our identities (although our intersectional identities greatly affect our experiences and realities) but also about the causes we fight for. As a young activist working on period poverty and stigma, I know that this is much more than merely a sexual and reproductive rights and health issue. It is also about deep poverty, gender inequality, discrimination, sustainable development, and taboo cultures. Internalising intersectionality and approaching our fight with a multidimensional approach have been crucial in this journey.

Today, in my We Need to Talk journey, I have my managing partner Bahar and a family of young passionate feminist volunteers trying to break the taboo with me. I clearly remember the times in which we received hate mails and troll comments on a daily basis, telling us what we were doing was immoral. We were physically confronted by angry elderly men from the villages we visited and had to distribute sanitary pads in black plastic bags in very conservative neighbourhoods. Those were tough times in which we had to pick our battles, and had to contradict some of our principles. But instead of leaving the villages and leaving young women and girls in need behind, we still made sure that they had access to the essential products.

We have struggled with promoting menstrual products that are used by penetration, such as tampons or menstrual cups, because of the common cultural norms and stigma around virginity and the hymen. While we do not share the set of values around virginity and sexuality that are common in conservative neighbourhoods, we never push for a certain type of menstrual product and always consider that our suggestions could indeed affect the security of young girls within their communities. We always try to introduce a wide range of menstrual products and we believe menstruators can decide which is best for them. We do not shake our fingers at anyone. We provide safe spaces and freedom of choice for menstrual care and try to continue our activism through a delicate balance of advocating for our rights and keeping the cultural context in mind.

Without a doubt, there have been times in which we had to overcome major barriers, but there have been other times when we knew we were on the right path. Once, a boy came to me and thanked me for explaining what periods were. Because of the mysterious blue liquid shown in TV ads, he used to think girls started peeing their pants regularly, and what they had to use were baby diapers. He promised me he would never make fun of his girl classmates or siblings and that he would support them. There were times in which we had to answer a flurry of questions not only about periods but about puberty, flirtation, consent, college education, and so on.

There is a harmful traditional practice called the first period slap, in which children having their first periods are slapped in the face to remind them of their womanhood. It is unfortunately commonly practised in Eastern Europe and the Middle East. Mothers who were slapped when they first had their periods promised us to break the cycle after joining our training, to leave the so-called traditions behind, and to fully inform and prepare their children for menstruation. We have built momentum and we have personally reached out to more than 50,000 beneficiaries, who are working and studying hard under very harsh conditions. Through our digital educative content, we have reached many more.

Access to menstrual products is not only about hygiene but also about dignity. And we believe everyone deserves dignity. We have been able to start a long-overdue conversation in Turkey and the Middle East. But we are just getting started.

İlayda Eskitaşçıoğlu is a Young Leader for the SDGs endorsed by the United Nations, and co-founder of We Need to Talk Association.